Nothing bothers me more than a leading man who’s too perfect. Fane Donado is anything but, as we learn in the first few pages of this Twilight-esque tale. Our hero,  a wierd-looking, skinny guy with “unfortunate hair,” whiles away high school gym class sucking face with a red-headed vixen named Valerie in the bleachers while classmate Aurora Sky looks on in disgust. Not the most auspicious beginning for an epic romance, but it certainly caught my interest- and made me laugh. As the series progresses, we learn more about the mysterious Fane (turns out he has killer abs!) and why, despite his bizarre looks, Aurora is drawn to him.

This book is a snarkier, edgier, more explicit take on the “ Twilight” formula, with a car accident as the catalyst for Aurora’s transformation from a “bland Bella” to a bad-assed hunter of vamps. The new Aurora is attracted to weird-but-sexy bad boy Fane, who of course is a big ole softie under all the mesh and piercings. Then comes the obligatory love triangle, with quite possibly the only white guy named “Dante” ever (besides, you know, Dante) entering the picture as Aurora’s mentor and partner in vampire hunting. Dante is a great character- hilarious, totally inappropriate, and a refreshing foil to the brooding Aurora as she struggles with her new life.  Best of all is the setting, which plays a starring role on every page of Jeffords book as the characters interact with and inhabit the stark, arctic beauty of the Alaskan landscape.

The plot twists in this series are so predictable even the protagonists aren’t that surprised by them, but the first person-narration makes it work (i.e., “I always knew on some level that..blah blah blah..but I didn’t want to admit it to myself…” etc.) Jeffords also puts some effort into explaining vampirism as a result of a certain blood type’s reaction to disease. However, we don’t read paranormal romance for the plot, do we, fellow readers? It’s not about the destination, it’s about the journey, and the snappy dialogue, flawed, yet likable characters, and vivid Alaskan setting make this one you will enjoy. 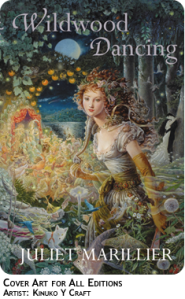 Jena and her four sisters live with their largely absent, merchant father in Castle Dracul in the Transylvania hillside. Every month, their dreary existence is brightened by forays into to the Wildwood forest where they dance under the full moon with the fantastical creatures of Faerie.  Jena is dismayed when her eldest sister, Tati, falls desperately in love with one of the pale, otherworldly Night People. Lucky for us, the story is only marginally about these two sad sacks (the boy is depressingly named “Sorrow”) but instead focuses on Jena’s heroic efforts against the machinations of her evil cousin Cezar, who is attempting to step into her absent father’s shoes and take over Castle Dracul.  In addition to threatening Jena and her sisters, Cezar is driven to destroy the Faeries of Wildwood, whom he holds responsible for the mysterious death of his younger brother years ago.

Every heroine needs a sidekick, and in Jena’s case, her  telepathic frog, Gogu, provides moral support and a few surprises as the book comes to its satisfying conclusion. However, if I had one criticism of this book, it would be this: too much frog, too little romance. Yes, Gogu is adorable, sleeping on her pillow and nestling in her pocket while she dances with erstwhile suitors. But, he also eats bugs. The non-bug eating hero doesn’t show up until the last quarter of the book, which means we don’t really get a chance to watch their romantic relationship develop.

Both sisters (and frog) all get their HEA, although there is the typical YA business of  “and so everybody learned their lesson and is now older and wiser, blah blah blah etc.” What really makes this book worth reading is Marillier’s efficient ability to breathe complexity and believability into her protagonists with masterful dialogue, plotting, and descriptive language. Even the most minor characters are at once arresting and imperfect, and you feel that they each have their own story to tell, if Marillier would only indulge them.

Should You Read It?

Refreshingly free of singing reindeer and bleating ice princesses, this deliciously sexy novella and adult fairytale  is a perfect bite-sized read for a cold winter’s night.

Our tale of forbidden snowman love opens with the female lead, Olivia Martin, driving on the icy Colorado roads to the mountain retreat of her co-worker, Erik Gulbrandr, to take care of some unfinished business. Olivia is a tough, yet likable heroine: she is a no-nonsense businesswoman in the male-dominated construction industry, drives a Jeep equipped for a possible snowpocolypse, and packs a 9 mm.  She secretly pines for Erik, even after he gave her the big brush-off after their one and only (earthshaking) kiss.

At first, Erik is an unbelievable ass, but we PNR veterans  just KNOW he is pushing her away for some noble reason..and that reason turns out to be that once a year, on the winter solstice, he turns into a giant popsicle dude with super-freezing powers and a violent desire to claim his mate, who turns out to be Olivia.  The victim of a freaky Nordic curse,  he is also fated to battle slavering wolf-like creatures until Ragnarok (Judgement Day.).

Yes, this is well-trod territory…boy meets girl, boy pushes girl away because of his freaky superpowers, some werewolves show up, etc., etc..   However, Erik and Olivia are both likable characters and, once they manage to get out of their own way, it is fun to watch them work together to solve their problems.

Should You Read It?

Yes. Meljean Brook is a master at spinning the inner lives of her characters into a richly detailed tapestry that plays out against the backdrop of fantastical outside events.  Here, she departs from her usual exacting prose  for a more pedestrian, first person narrative which makes the story more accessible but ultimately less memorable.  Although “Frozen” pales in comparison to her longer, more intricate novels, it is still fun, compulsively readable, and eminently satisfying.